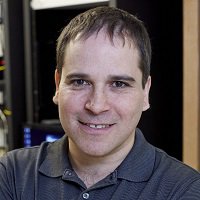 Gaby Maimon is an associate professor and head of the Laboratory of Integrative Brain Function at The Rockefeller University, as well as an HHMI Investigator. He studies how the Drosophila brain calculates and stores quantitative internal variables – such as distances, angles, time intervals, and event probabilities – to guide behavior. Using advanced genetic, physiological, and behavioral methods, Maimon and his team identify neurons exhibiting physiological activity that tracks the value of internal variables, then determine how these internally constructed signals impact behavior. The lab's long-term goal is to provide comprehensive descriptions of how higher brain functions are implemented, from molecules to movements. Maimon received his B.Sc. in biology and society from Cornell University, and his Ph.D. in neuroscience from Harvard University. He received a Presidential Early Career Award for Scientists and Engineers, 2012; an NIH Director's New Innovator Award, 2012; and the Gabrielle H. Reem and Herbert J. Kayden Early-Career Innovation Award, 2017, among others. For further information click here.

Gaby Maimon and Larry Abbott will be presenting together.
Talk Title: How brains add vectors