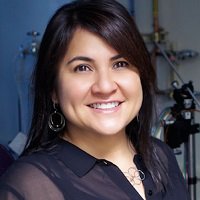 Diana Bautista is a professor of cell and developmental biology in the Department of Molecular and Cell Biology and is affiliated with the Helen Wills Neuroscience Institute at University of California, Berkeley. Her research focuses on the molecular mechanisms underlying the sensations of itch, touch and pain. Humans rely on these senses for a broad range of essential behaviors. Her lab uses cellular physiology, molecular biology, molecular genetics and behavioral studies to elucidate the molecular mechanisms underlying itch and pain transduction under normal and pathophysiological conditions. Bautista received her PhD from Stanford University. She has received a number of awards including the NIH New Innovator Award in 2010, she was named a Rita Allen Scholar 2010 - 2012 and she was awarded the Handwerker Prize for Research from the International Forum for the Study of Itch in 2013. In 2016 she was named an HHMI Faculty Scholar. For further information click here.