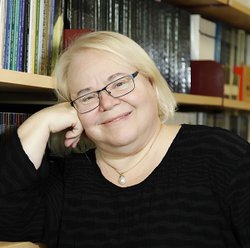 Eve Marder is the Victor and Gwendolyn Beinfield Professor of Neuroscience in the Biology Department. Dr. Marder gained her first degree in biology from Brandeis University in 1969. She earned her Ph.D. at the University of California, San Diego in 1974, and then worked at the University of Oregon in Eugene, and the École Normale Supérieure, Paris. She then returned to the Biology Department at Brandeis University, becoming a full professor in 1990. She has pioneered understanding of how a neural circuit can generate the necessary rhythmic firing patterns that control rhythmic muscle movements such as breathing, walking, and passage of food through the gut. Her awards are many and include the Women in Neuroscience Mika Salpeter Lifetime Achievement Award (2002), the Gruber Award in Neuroscience (2013), the George A. Miller Award from the Cognitive Neuroscience Society (2012), and the Kavli prize in Neuroscience (2016). For further information click here.

Differential Resilience to Perturbation of Circuits with Similar Performance